The Lament At The River

The Lament At The River

137:1 By the rivers of Babylon, there we sat down, yea, we wept, when we remembered Zion.

137:2 Upon the willows in the midst thereof we hanged up our harps.

The willow, like us, looks strong, but its roots in the land are shallow, and HaShem’s wind will uproot us at His will. The willow grows well by the waters, like us, when we are faithful and watered by the words of HaShem. The willow grows tall and then bends down humbly; like us when we are faithful, we bow down to HaShem. But now the willow reminds us of our brazenness and we are now bent low in a foreign land.

The harp is an instrument of joy, and in this land there is no joy. The harp is an instrument of the Temple, and the Temple is no more, so we have hang up our harps. We hang up our harps in the willow’s branches so when the wind blows it will make the harp vibrate and remind us of what we had and to humble ourselves before HaShem. We hang our harps in the branches in hope that in His great mercy, He may look favorably on our repentance and return us to the land.

137:3 For there they that led us captive asked of us words of song, and our tormentors asked of us mirth: ‘Sing us one of the songs of Zion.’

When we turn our backs on HaShem, He will hide his face from us. When HaShem hides his face, our enemy, like the jackal that smells the rotting carcass, follows the scent to devour the remains. They howl in delight. 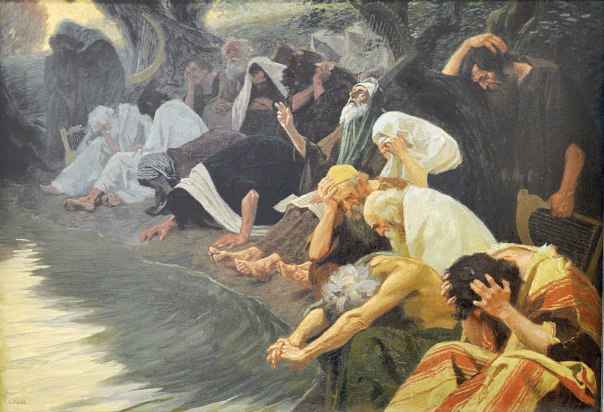 On the Rivers of Babylon – Jhbard Fogel 1920

Now, only now, do we see the great error of our arrogance. We were haughty and brazen and are now brought low. Until we repent, we cannot form the words, for they have been removed from our heart. We now understand that, without HaShem all lands are foreign.

137:5 If I forget thee, O Jerusalem, let my right hand forget her cunning.

Let not the memory of the most treasured jewel in Your crown be taken from us. For if the memory is lost, then we will have no skill with which to rebuild our shattered people.

137:6 Let my tongue cleave to the roof of my mouth, if I remember thee not; if I set not Jerusalem above my chiefest joy.

For if the memory fades, we will be a nation of mutes; unable to speak our repentance, unable to sing Your praises; forgetting even from where we came. A wandering and grieving people who knows not were they wander or for what they grieve.

137:7 Remember, O the Lord, against the children of Edom the day of Jerusalem; who said: ‘Raze it, raze it, even to the foundation thereof.’

We recall the words of Edom as if they said, “Rip out, rip out the hearts of the people; destroy, utterly destroy their souls. Remember us, thy repentant children who now accept the yoke of punishment justly imposed, and do not long forget thy chosen.

137:8 O daughter of Babylon, that art to be destroyed; happy shall he be, that repayeth thee as thou hast served us.

Babylon was told by HaShem to punish the people. They were given warrant to take the people, but only the people. The abode of HaShem they were not to touch; but in their brazenness they destroyed what belonged to HaShem. Repay their wickedness against Your house; stone for stone, brick for brick. Your treasures they looted and they defiled Your Holy palace. Take back tenfold from the thieves what is Your’s.

137:9 Happy shall he be, that taketh and dasheth thy little ones against the rock.

Babylon shall be repaid in full; as was done to HaShem’s chosen in wickedness will be done to Babylon in justice.

(from my book “New Chasiddic Stories”)