The Story of Zeyde the Lion Puppet

Let me tell you a little story about this puppet, Zeyde, which so many people have come to love. 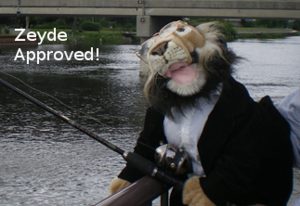 Zeyde started out as a character from our comic strip, 4 Corners. Zeyde started out as a composite of the Besht, Rebbe Nachman of Breslov and Rabbi David Mann (a very dear friend and mentor). When we came up with the character we decided that Zeyde was to be wise, kind, patient, giving and have a great sense of humor (and yes, at times, even a bit irreverent). He should be able to teach lessons without lecturing or scolding, but by simply telling stories and being a living example.  Zeyde came to represent my higher aspiration, what I want to be; what I strive to become. Zeyde is my Cedar of Lebanon.

Now, 4 Corners’ main characters were Chiya, David, Miriam, Sam and Zeyde. One day, Randy and I were talking about the strip, I believe the strip was 10 years old by then, and we were amazed that, over the years, these characters had taken on their own personality traits. Chiya was the brains, David was the jokester, Miriam was the shy one and Sam was the strong silent one. And Zeyde, well, Zeyde was Zeyde; what else can you say?

We would get an idea for a strip and then determine what the character’s reactions are going to be the situation. The characters actually dictate the direction of the strip. Many times we start out in one direction and end up in a completely different direction based on the character’s reaction.  A friend once said of the comic strip “As the characters are unaware of the mind of the artist, or the world beyond the four panels of the comic strip, so are we unaware of the mind of G-d or the world beyond our own.” That statement hit me like a brick! I decided to write a book (that I am still working on) called “G-d Must Be A Cartoonist – or, How Drawing The 4 Corners Comic Strip Gave Me A Glimpse Into The Nature Of G-d”

So, Zeyde, who was originally a character that would make occasional appearances, became a major character of the strip. If we did a strip where Zeyde was sick, we would get emails and comments that people hoped Zeyde would feel better soon. No character that we created in either comic strip (4 Corners or Hidden Lake) made more of a connection with the audience than this old lion. Zeyde became the 4 Corners Rebbe. People wanted to interact with Zeyde, so, after much searching, and with the talents of Reginah Water Spirit, Zeyde became a puppet. Wherever he goes, people are automatically attracted to him; young and old, all want to see Zeyde. Even Hollywood stars wanted to have their picture taken with him and would spend time talking with him. Zeyde was always ready with a joke, or a story, but always it was with a lesson. 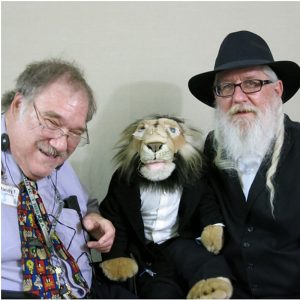 To think, this simple piece of cloth and stuffing, animated by a slightly off kilter Rabbi, has probably had a bigger impact on more people and their faith than I could have ever expected – and for that I am grateful (B”H).

This entry was posted in Rabbi's Thoughts. Bookmark the permalink.