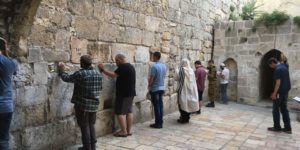 The Lubavitcher Rebbe once wrote “I must point out to you that splitting Judaism into ‘orthodox, conservative, and reform’ is a purely artificial division, for all Jews share one and the same Torah given by the One and the same G-d. While there are more observant Jews and less observant ones, to tack on a label does not change the reality that we are all one.’”

This is a wonderful statement and a beautiful sentiment; however, we rarely see this being carried out in far too many shuls, synagogues, congregations and temples. Even among the talmidim of the Rebbe, we do not see this concept being followed through. Why is that? What reason can there be to divide us among ourselves?

Is it because we pray out of different siddurim? That would be a foolish reason to divide us since we know from our own history and historical documents that there have been many differing siddurim. Even going back to the study of the Cairo Genizah in 1896, we have seen that ancient congregations in Cairo, during the same time period and before all these artificial divisions, were using differing siddurim from congregation to congregation in the same city. They were not Chassidic, Orthodox, Conservative, Reform, Renewal, or whatever label they place on themselves, are someone else has placed on them; they were all simply Jews.

Is it because we dress different? Again, that would be a foolish reason to divide us. I am not my clothing just as my body is not my soul. Does the type of kippah, a black hat, a turban, or a baseball cap tell you what is in the person’s heart? Look at the picture at the top, every person there wears something different. Is the man wrapped in the tallit holier than the man wearing the shorts? Is the man in the uniform at a lower level than the man wearing the tzitzoit? You cannot tell, right? Clothing is only a set of garments.

Is it because of the level of observance? How is a person to grow in observance if there is no one to guide them, if no one sets the example? Isn’t it true that, in this corporeal world, we must all grow and progress to higher and higher levels? One does not climb a ladder by starting in the middle. If you don’t assist those in their climb, you have fallen from your own level.

So, maybe it is because of a person’s fluency in reading the prayers or knowledge of Torah? Now, just how foolish would that be as a source of division? That would be like expecting the child to emerge from the womb fully fluent in Hebrew, Aramaic, Torah and Talmud. Do we expect the 5-year old to be able to read and comprehend Shakespeare? Didn’t we all start as children not being able to speak or read until someone taught us? We are all here to learn.

Once we look at the excuses, and that is really all they are, they seem like pretty flimsy and petty reasons for division. Why then do we do it? Where in all of the Torah does it tell us to segregate ourselves into groups and shut out everyone else? It is baseless, and serves no real purpose.

I have seen Reform congregations that refused to allow an Orthodox or Chassidic rabbonim on their bema. I have seen Jews refused an aliya to the Torah in Orthodox and Chassidic shuls, even when they were needed to make a minyan. I have seen the discrimination of Jews by Jews going in both directions, and it seems to be more the rule than the exception. It is a shandeh un a charpeh (a shame and a disgrace)!

We lost the first and second Beit HaMikdash because of baseless hatred among Jews! Isn’t twice enough? How can we merit the third Beit Hamikdash when we have not even learned from the lessons of the first two?

So, what does it mean to love your fellow Jew? Do you have to accept everything he does or says? No, that is not what it means, that is just illogical blind acceptance, and the Torah tells us that this is not acceptable either. What it means is that, we recognize that this person is a Jew with a divine spark within him, and while he may not be behaving ethically or being as observant as we would like him to be, he is still a Jew and “there is nothing we can do about it.” So, if we are obliged to love him, that makes it our responsibility to do what is within our ability to raise him up. That includes accepting him and not treating him as if he were not a part of Klal Yisrael, or purposely doing things that will embarrass or shame him in front of the community. If he asks you questions you give him answers. If he comes to you to learn, you teach him. If all you can do is to be an example, be the example. You never know what seeds you sow will come to flower in the future.

Let us work to eliminate all these divisions among ourselves and just be Jews. That would be enough!